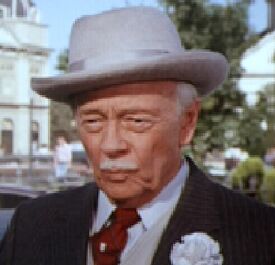 'Big Daddy' Hogg is a fictional character on the American television series The Dukes of Hazzard.

'Big Daddy' Hogg is the head of the Hogg Family.

He presents himself as straight as his son Abe Hogg (J.D.'s brother). However, deep down he's more crooked than Boss ever was. In fact, he is one of the biggest scam artists the south has ever seen, next to his son of course.

Big Daddy was a sharecropper[1] who became a scam artist and stole a large amount of wealth. According to Boss, the family rarely saw Big Daddy when they were little as he was always away. Boss says he was the best salesman there was and started getting into other deals with stocks, oil, and land where he made a fortune. At some point his wife passed away[2]. He has at least four sons (Boss Hogg, Abraham Lincoln Hogg, and two unnamed sons) and at least three grandsons (Hughie, Dewey, and Jamie Lee)..

Big Daddy and Ernie have been working together as partners since at least 1968.

Big Daddy decides to visit Boss Hogg. He sends his son a telegram claiming he is traveling around the world and is passing by Hazzard so he wishes to stop and visit.

When Big Daddy and Ernie enter Hazzard, he comments 'now, now Ernie, slow down. We wouldn't want to get no speeding ticket would we' while he sits back in his seat. As they go, he chuckles, commenting he remembers the road they are on real well. He tells Erie he used to drive that road every Sunday with his boys and he used to sing in church choir. Ernie is surprised by that information. He hums as they continue to go.

They arrive in town where Boss Hogg and Rosco are waiting for him. Ernie opens the door for him and he climbs out of the limo. He greets his son and when Boss holds out his hands to hug him, he looks at the hands and tells Boss to turn them over, moving them with his walking stick. When Boss does he asks when is the last time Boss had a manicure before scolding Boss to use soap when he washes his hands and to clean behind his ears. When Boss says he hasn’t changed, he says Boss sure has, adding ‘looks like you having a mighty trouble pushing away from the dining room table.’ Rosco tells him there is a lot of Boss but they love him. He tells Boss that he sees his name on a lot of businesses and that Boss must be doing alright, which Boss confirms. Boss says he hopes Big Daddy is proud of him, as he is a pillar of the community like his father was in his own day and Big Daddy confirms he is proud. He then puts an arm around Boss, asking him to show him his financial dealings.

As he walks with Boss and Rosco, Boss suddenly excuses himself to talk to a man who started to approach them. He approaches anyway, hearing Boss and Jenkins talk about a deal for watches and watching Boss hand over $2200. When Boss gives the man an additional $500 he approaches his son, smiling and saying ‘that was a lovely gesture.’ He remarks imagine giving all that money to the needy and praises his son. Boss thanks him.

Big Daddy and Ernie stand beside the bank, watching as Boss hands out free money to a line of citizens. He approaches Boss, saying he can’t tell him how proud and thrilled he is to see him continuing the good Samaritan work that he always practiced and believed him. Boss thanks him and he leaves to go back to Ernie. He asks how much Ernie thinks Boss is worth and when Ernie says ‘quite a bundle’ he remarks that is his guess too. He says it seems like a shame he will have to do him out of it. Ernie remarks it’s his son and asks if he would really con his own flesh and blood. He scolds Ernie, saying ‘blood may be ticker than water, but money is thicker than blood’. He asks Ernie if he remembers Savannah in 1968 to which Ernie grins, saying that is how they will do it. When Ernie asks if they are going to take the bank, he becomes offended saying no, not that much from his son and asking if he has no heart.

He, Boss, Rosco, and Ernie go to Boss’ office and he says he is surprised at how much money Boss keeps on his person. He adds ‘like Big Daddy like son’ and Boss asks that he also walks around with large amounts of cash on him. Big Daddy asks isn’t it a bother to always walk over to the bank and Rosco informs him that there is a safe in the office. Rosco tells him he’s seen Boss put $50,000 in it, to Big Daddy’s shock. When Boss tells Rosco that $50,000 is a little for him, he chocks up and remarks that if it’s safe enough for Boss’ money then it is safe enough for his money. He takes his money belt off and tells Boss to put it in the safe until he leaves town. When Boss asks how much is in it, he claims $50,000. When Boss opens the safe, he signals to Ernie to move. Ernie pulls a gun on Rosco and Boss and he pretends to be scared, allowing Ernie to push him over with Boss and Rosco. He pretends to be upset with Ernie saying he’s been like a father to Ernie. When Boss asks that he’s known Ernie for a long time, he tells Boss that ‘he had good references’. Ernie ties him together with Boss and Rosco.

After Ernie leaves they hop over to the window together under Boss’ guidance. They call for help from the window, seeing Ernie drive off in the General Lee with Vance at gunpoint. When Boss points it out, he is confused remarking ‘how’d that happen?’ They hop to the door when Enos and Cletus come stumbling in, knocking them all over. The deputies untie them. Boss sends the officers after Vance and Ernie. Big Daddy stays with Boss to wait for the results.

As the excitement dies down, he decides it’s time to leave and his son walks him to his car. He tells Boss he hates to leave him at a time like this. He says for Boss to keep it down to six or seven meals a day, be a good boy, wash behind his ears, and try to remember how much he loves him. They choak up as they hug and leaves as Boss thanks him for everything he’s done for him. He heads to where he and Ernie agreed to meet.

He arrives where Ernie is parked by the General, the two happily reuniting before he gets in the back and lets Ernie drive them away. They celebrate their successful scam.

Hearing the sirens, he becomes alarmed telling Ernie ‘my bones tell me something’s gone amis’ which Ernie agrees. When Ernie says for him to hold on, he tells Ernie to get them out of there fast, encouraging him to go faster as the Dukes start gaining. The Dukes leave the road, only to cut them off. As he gets out of the car, Ernie pulls out a gun. He grabs Ernie’s wrist, telling him to forget it as they have gone about as far as they can and to just wait it out. They are approached by Rosco and Boss, and he gives Boss a small smile, realizing he is caught. Boss asks if he was ever even an insurance salesman, Big Daddy tries to explain but Boss goes even further saying he’ll bet Big Daddy has never earned an honest dollar. He becomes upset as Boss gets close, saying he swindled his own son. He says he doesn’t blame Boss for hating him. However he is stunned when Boss exclaims that he actually loves his father and he is grateful to him for showing him his heritage. They two hug. He returns Boss’ money, all except for $5,000 he slipped out, and he and Ernie leave. Boss tells them to be careful.

As Ernie drives, Boss calls to ask if he realizes he kept $5,000. He responds, saying ‘yeah I know that son. But I got expenses that need taken care of too.’ He tells Boss not to forget to write.