Beauregard "Bo" Duke is a fictional character in the American television series The Dukes of Hazzard, which ran from 1979 to 1985. He was played by television actor John Schneider (b.1960).

Bo was born around 1958[1] and lived in the unincorporated area of the fictional Hazzard County, in Georgia with his Uncle Jesse since infancy, who delivered him as a baby [2]. According to Bo he has never lived anywhere else[3] and he came to live there after the death of his parents. As a child, Bo was very athletic, playing on a Little League Baseball team and a basketball team along with Luke, Cooter, and Enos[4]. During his time in High School, Bo played linebacker on the football team[5]. At one point during his childhood, Bo made Luke so angry that Luke took a swipe at him with a baseball bat. Bo was able to avoid the bat, but hit his head off the wall in the process[6]. While in highschool in Mr. Broom's scinece class Bo had an accidently and nearly blew up the classroom[7]. Ever since Bo was a little kid, he always dreamed of one day becoming a racecar driver on the NASCAR circit[8].

Bo and Luke own a 1969 Dodge Charger,named The General Lee, which is painted orange, with the Confederate flag on top, and 01 painted on the sides with the name "General Lee" inscribed above the doors that were welded shut for safety. The boys built the engine together and completed the car in 1976 where Bo won his first race and completed the first jump[9]. Bo and Luke evade the corrupt officials of Hazzard County, such as Boss Hogg, Sheriff Rosco P. Coltrane, and the only honest police officers Hazzard has ever had, Enos Strate and Cletus Hogg only because they had to follow orders from Boss Hogg and Sheriff Rosco.

The Dukes (including cousin Daisy Duke and Uncle Jesse Duke) were well known for their role in the moonshine business among other interests. Bo and Luke had both been sentenced to probation for illegal transportation of moonshine. As a result, neither was permitted to use firearms, instead preferring to use bow and arrows. It should also be noted that the terms of Bo and Luke's probation included staying within the boundaries of Hazzard County (unless given special permission by their Probation Officer, J.D. Hogg).

Bo (the blonde Duke) was the younger of the two Duke boys, and the more impulsive one of the pair. He often reacted to situations without first thinking or planning, and was the one more likely to get into a fight, although Luke was the better fighter (having been in the Marines). In general, it was usually Bo who got the two into trouble. The character of Bo was best known for his rebel yell exclamation of the catchphrase, "Yee-Haa!"

Most of the time, it was Bo who drove The General Lee, while his cousin Luke rode shotgun. Bo was an ex-stock car driver, and he was typically the one known for taking the General off most of its legendary jumps. Because its doors were welded shut, Bo and Luke always had to climb in and out of the car through the windows. Actors John Schneider and Tom Wopat admitted that, on occasions that the roles were reversed and Luke drove, they found it much more difficult to climb in and out of the opposite window to which they were accustomed.

Bo later left Hazzard County, along with his cousin Luke, to join the NASCAR circuit (coinciding with Schneider's and Wopat's decision to hold out); Bo's cousin Coy (Byron Cherry), who was very similar in nature to Bo except somewhat more of a lovebird, replaced Bo until he returned to the show a few months later.

According to the 1997 Reunion movie, Bo left Hazzard again to pursue a successful NASCAR career, this time without Luke. Shortly before his return to Hazzard, he crashed his car, and is still in Hazzard in the 2000 Hazzard in Hollywood film. Although he was a lifelong bachelor, in the 2000 movie he met a woman named Gabrielle (nicknamed Gabby) in Los Angeles, and convinced her to go Hazzard to be with him.

Bo in the TV Series 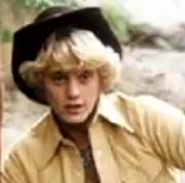 Bo in the TV Movies 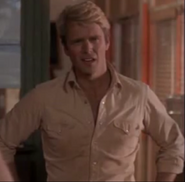