Deputy Cletus Hogg is a fictional character featured in the American television series, The Dukes of Hazzard, from 1980 to 1985. He was played by Rick Hurst.

Cletus was Boss Hogg's second cousin once removed. He mentions in several episodes that he only has 1/8 Hogg Blood running in his veins. He is generally portrayed as dim-witted and friendly. Examples of this include his beleif in Santa Clause despite his age[1]. He also has shown an attraction to Daisy, although it was not as strong as Enos'. Cletus also doesn't drink alcohol[2].

Cletus grew up in Hazzard along with Enos, the Dukes, Hughie, and Cooter. He attended school in Hazzard County. In first grade when he wasn't doing well, he gave his teacher Mrs. Crumbly an apple so she would pass him to the next grade[3]. Cletus was also greatly impacted by his fourth grade teacher Ms. Mackery and kept to her demands of keeping Hazzard clean[4].

He made his first appearance as the driver of a bank truck, one of

He worked at a local junkyard, before he was appointed[6] deputy sheriff of Hazzard County when Enos decided to join the L.A.P.D.[7] Like Enos, he would often be forced by Rosco and Boss to chase the Dukes on trumped up charges, but while generally good-hearted and sometimes resentful of having to treat the Dukes in such way, he was generally more willing to than Enos. When Enos returns he and Enos work together, sharing a car and a paycheck.[8] At some point while working as a police officer, Cletus begins to take Karate lessons[9]. Cletus eventually takes a vacation in 1982 before deciding to leave the police force.[10]

Around 1987, Enos leaves again for the LAPD and Cletus steps in to become a deputy for the Police force, staying on even after Boss passes. [11] 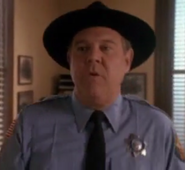