Cooter Davenport is a fictional character from the American TV show The Dukes of Hazzard. He was played by Ben Jones.

Cooter was born around 1946.[1] He grew up in Hazzard, close to the Duke Family. When he was younger he was on a basketball team with Enos, Bo, and Luke.[2] Around the time he graduated high school he married Beverly Hibbs but her father had the marriage annulled. Later he discovered she had a baby girl, their daughter[3]. In 1974 Cooter was in Oklahoma where he nearly was killed in a fire but was rescued by Jonas Jones, leading to a life long friendship[4].

He maintained a steady business, mainly because the Duke boys were constantly damaging their car, the General Lee and ultimately eventuating the wreckage of the county patrol cars as well (as Cooter once pointed out, following the Dukes around is guaranteed to increase his business). Everything from a new door or bumper to a simple wash and wax cost $35.42.

Cooter was also an "honorary Duke", as he was the best friend of the family and he regularly assisted them in foiling Boss Hogg and Sheriff Rosco P. Coltrane.

Cooter also owns a small farm,[5] however, he spends most of his time at his garage, and many episodes suggest he also lives there. It has also been implied that Cooter often lives out of his truck.

Though Cooter would not start a fight without good reason, he does enjoy a good fight (being quite a good fighter, himself, Cooter rarely loses a fair fight).

Cooter and the General Lee

He was also the supplier of its unique orange paint (it was all that he had, in a quantity sufficient enough to paint a car with).

It is also suggested that it was he who supplied the famous "Dixie" horn.

Cooter drove a variety of trucks.

In the third season and half of the fourth season, he drove a yellow 1979 Ford F-350 Custom tow truck.

In the latter half of the fourth season and rest of the series, he drove a blue and white 1968-72 GMC C-Series tow truck. 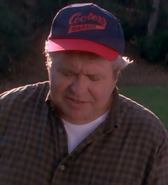