Daisy Mae Duke is a fictional character, played by Catherine Bach, from the American television series The Dukes of Hazzard. She was the cousin of Bo and Luke, the main protagonists of the show, who were themselves cousins to each other.

In the 1997 Reunion movie, Daisy says her mother died when she was born

Daisy would frequently become involved in the Dukes' car chases, using one of her cars, including the 1973 Plymouth Roadrunner or the 1980 Jeep CJ-7 "Golden Eagle" christened "Dixie"

Daisy also worked as a server at the Boar's Nest, the local bar owned by Boss Hogg. The reason daisy works at the bar, is because around the time Bo was graduating High School and Luke was getting out of the US. Marine corp, The Dukes needed a loan. Since J.D. was president of the Hazzard County Bank, they went to him for help. He agreed to give them the loan at 30% with the Duke Farm as collateral. As Jesse was trying to negotiate with J.D., Daisy stepped in and asked Boss, since he was after her to work at the Boars Nest, if she agreed to work there, would he consider giving Jesse the loan at 15% instead of 30%. Boss eventually agreed because he said "You may be a Duke, but you sure do have the prettiest legs in all of Georgia".[1]

Daisy Duke eventually went to college at Duke and received her Doctorate in Ecology. [2]

Despite her appearance as a naive (and provocatively dressed) Southern belle, Daisy was a very outgoing, polite, and selfless person who could more than hold her own when the chips were down. For instance, during one adventure with a stolen armored personnel carrier, Daisy is able to accurately fire its main gun while the vehicle is in motion with barely any instruction from her veteran cousin and Uncle Jesse cheerfully decorates her as "Sharpshooter of the Week" for the feat. She also displayed horse riding, archery, fixing cars and various other skills. For example in the season four episode "Miss Tri-Counties" she successfully rebuilds a

carburetor in 49 seconds mostly in the dark . In addition to fending off intoxicated would-be suitors at The Boar's Nest, she frequently found herself caught up in the ongoing war between Boss Hogg and her family, the Duke clan. Her job at Boss's restaurant gave her the opportunity to eavesdrop on crooked private conversations between Boss, Sheriff Rosco and various cohorts, often discovering important information that she could pass on to Uncle Jesse and the Duke boys. Her continued employment at the Boars' Nest in spite of her obvious loyalty to her family was seen on the TV show as both a sign of her status and popularity in Hazzard County, and a corresponding lack of intelligence on Boss Hogg's part.

Her first car was a yellow 1973 Plymouth Road Runner with a black stripe along the sides and over the roof. Although the car was intended to be a Plymouth Road Runner, later episodes used a 1971 Plymouth Satellite with a matching "Road Runner" stripe painted behind the rear window. The car met its demise when the brakes failed while Bo and Luke were driving it in the second season episode "The Runaway", sending it over a cliff. (Due to the episodes being broadcast in a different order to that of which they were filmed, the Plymouth made several returns after it was supposedly destroyed.) After losing that car, she received her trademark white 1980 Jeep CJ-7 "Golden Eagle" named The Dixie which had a Golden Eagle emblem on the hood and the name "Dixie" on the hood sides. As with other vehicles in the show, there were

different versions of the Jeep shown in various episodes. Sometimes the Jeep would have a different paint scheme with the "Dixie" name on the hood instead of the doors, and it would alternate between automatic and manual transmissions.

Daisy never found a long-lasting beau of her own over the course of the series. In the reunion movie, she is said to have left Hazzard to get married, but was subsequently divorced. After her marriage ended, she was pursuing a graduate degree at Duke University, and upon her return to Hazzard agreed to marry Enos Strate, who long had a crush on her, but backed out at the last minute for fear of another debacle like her first marriage.

As a sex symbol

Daisy Duke was both the main female protagonist and the sex symbol on Dukes of Hazzard. On two episodes Daisy wore a red bikini to distract Cletus and a truck driver. She appeared numerous times wearing cut off jean shorts, Daisy Dukes, a name that later became accepted vernacular for a type of woman's cut-off shorts.

The network censors believed that Daisy's famous cut-off shorts alone would be too revealing. (The shorts were so short, that the only way the producers could get them on air was for Catherine Bach to wear flesh tone tights with them, to ensure that the shorts didn't reveal more of her than intended). In spite of that, the official Daisy Duke poster reportedly outsold those featuring the era's other sex symbols, Farrah Fawcett and Raquel Welch.

Daisy in the Made-for-TV-Movies 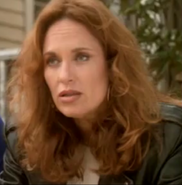 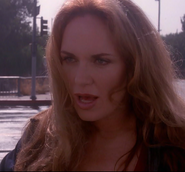 The Dukes of Hazzard: Hazzard in Hollywood!
(2000)
Daisy in the TV Series 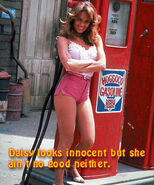 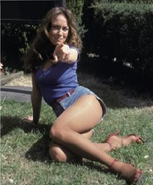 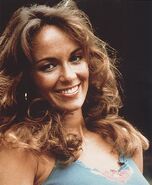