Enos Strate is a fictional character in the American television series The Dukes of Hazzard. The character of Enos was on from 1979-1980 and then after short break was on 1982-1985. Enos was played by Sonny Shroyer.

Enos was born in Hazzard County to a loving family, and grew up as friends with Bo and Luke Duke. At the age of sixteen, he enrolled at the Hazzard Police Academy, graduated at the age of nineteen, and was promptly hired as Deputy Sheriff of Hazzard County's Police force by J.D. Hogg. He is portrayed as polite and coy, yet bumbling young deputy. Enos is also the only honest lawman Hazzard has ever seen. Unfortunately, working under Rosco and Boss he was often forced into pursuing the Dukes and or arresting them on trumped up charges.

In the very early episodes, Enos was shown to be a rather good driver (and respected as such by Bo and Luke), but by the end of the first season, he was shown to be as an incompetent driver as Rosco.

Enos had a crush on Daisy Duke that she often used to the Dukes' advantage in unraveling Boss and Rosco's schemes.

Rosco frequently called him "Jackass", which soon evolved into the more family friendly "dipstick" as the show become a hit with younger viewers.

Enos was known for using the expression "Possum on a gum bush" whenever applicable.

During season 3, Enos joined the L.A.P.D and was replaced by Boss Hogg's relative, Cletus Hogg. Upon return from L.A, Boss had Enos and Cletus share a car due to "county budget problems". He is now able to stand up to Boss and Rosco slightly more, and sometimes flat out refuses to follow orders. Whenever he is told to chase the Dukes, he responds by saying "but sheriff they aint doin over 50!" to which Rosco replies " I dont care ya dipstick! Catch them Dukes!".

He soon becomes the most capable of the Hazzard Police Department dealing with real threats: first to handcuff the bad guys or draw his gun to cover them.

It would appear that after the series ended, Enos returned to California (as implied in 1997's Reunion movie).

Enos is very much in love with Daisy, and although Daisy is indicated to love him back, it is only as a close friend. In the episode, "Enos and Daisy's Wedding", the two plan on getting married, only to have Enos call it off at the last minute due to an attack of hives, brought on by the excitement of possibly being married to Daisy.

Later, in the first Reunion movie, Enos and Daisy become a pair again and plan to get married - but this time Daisy backs out at the last minute, upon the unexpected sight of her ex-husband.

Enos Strate was one of the few original characters from the series with no basis on any real person from Jerry Rushing's life.

Creator Gy Waldron wrote the character of a goofy "straight and narrow" cop based on actor he knew named Sonny Shroyer. Shroyer auditioned for the role and was selected from a list of prospects, having no knowledge that the character was written specifically for him. 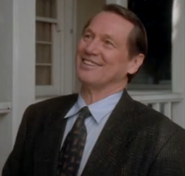