The Dukes of Hazzard Wiki
Register
Don't have an account?
Sign In
Advertisement
in: Locations, Real World Perspective

Georgia is a state of the United States, located in the south-east of North America at the coast of the Atlantic north of Florida. Georgia was established in 1732 and named after King George II of Great Britain. It was the last one of the original Thirteen Colonies and ratified the United States Constitution on January 2, 1788.

Georgia is the state where the fictional Hazzard County, the main location of the Dukes of Hazzard TV series and movies, is set.

Further fictional Counties in Georgia are:

Features Cities and Towns from Dukes of Hazzard's Georgia are: 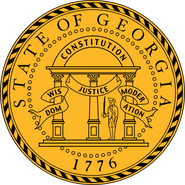