Jake Rainey is a fictional character of the 1975 movie Moonrunners. He is the Shiloh County boss.

Jake is a long-time friend of Jesse's from the old days (they both bootlegged for Jesse's father in 1934).

He owns the local bar/brothel.

Jake has control of all the moonshine in the county, except Jesse Hagg's.

He has a lucrative business and even sells it to the New York Syndicate (mob). He prefers to give the mob Jesse's supply, but Jesse has reservation, because Jake likes to mix it with lesser quality liquor. 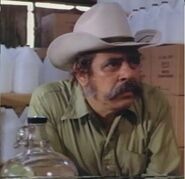