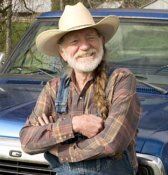 Willie Nelson portrayed Uncle Jesse in the 2005 film The Dukes of Hazzard and in the 2007 film The Dukes of Hazzard: The Beginning. This version of the character was known for his seemingly endless repertoire of risque one-liner jokes and his singing ability, in addition to his sage-like advice. In reference to Nelson's well-publicized support for legal marijuana, Nelson's Jesse also was shown enjoying a puff of pot