Uncle Jesse is a fictional character of the 1975 movie Moonrunners. He is the family patriarch of the Hagg family, living in Shiloh County. He is a widowed, bearded moonshiner, with strong religious beliefs, raising his nephews.

Jesse Hagg is a Baptist, who knows the Bible better than the local preacher. He has been a widower since his wife Libby died ten years ago.

The recipe Jesse uses has been around since before the Revolutionary War, coming from his “granddaddy’s granddaddy’s”. He uses stills named ‘Molly’ and ‘Beulah’. Every drop is aged two years, and bottled in glass (never plastic).

Jesse only sells to a friend in nearby Florence to ensure that his liquor is not blended with other moonshines of lesser quality.

The following is an exchange between Uncle Jesse and the boys, after Jesse refuses to sell his moonshine to the county boss (who wants to blend it in bulk and sell it to the New York Syndicate).

Balladeer
(voice over) “Jessie had to be sure in his own mind that he was refusing Jake out of his convictions, and not from pride.”
Bobby Lee
“He was gonna pay you double.”
Grady
“Jessie, now I know that Jake thinks he’s a badass and all, but, well he’s a pretty good ol’ boy. Ain’t he Lee?”
Bobby Lee
“He’s one of us.”
Grady
“Now, I mean, if he’s got his tail in a crack. Jessie, ain’t you gonna help him?”
Jesse
(puts jug of moonshine up on truck hood, and sighs) “You know what that is?”
Bobby Lee
“Yea, it’s a jug of liquor.”
Jesse
“Look again. That’s a Model T Ford, it’s a Winchester Repeatin’ Rifle, it’s a Whitney Cotton Gin.”
Grady
“Jessie, you ok?
Jessie
“Don’t you see? That’s one of a kind, the best of its kind. That little jug is history. No money ever compromised it, no government ever made me conform. And you know boys, I actually pay taxes on my liquor.”
Bobby Lee
“What?”
Jesse
“That’s right, all the liquor money I get is declared as farm income, from the corn, every penny tax paid, and its still illegal.”
Bobby Lee
“Jessie, what the hell are you doin’ paying taxes?”
Grady
“Jessie, if anybody ever found out about this.”
Jessie
“Because the Bible says ‘Render unto Caesar the things which are Caesar’s,’ and boys those taxes sure belong to Caesar. Am I to compromise, all the things I’ve done my whole life for a few extra dollars. Just to help a little man, think he’s a big man. Boys, it’s a matter of principle.” 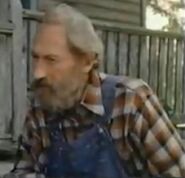 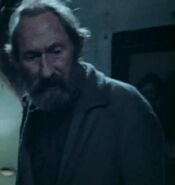 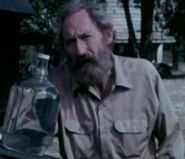