Lucas K. "Luke" Duke is a fictional character in the American movie The Dukes of Hazzard: The Beginning which came into the theaters in 2007. He is a younger version of the Luke Duke from the The Dukes of Hazzard TV series and was played by actor Randy Wayne (born 1981).

According to a wanted poster issued by the Hazzard County Police Department, Luke Duke stands 5'10" (178 cm) tall and has a weight of 160 lbs (73 kg). Luke has blue eyes and brown hair. He mostly wears a T-shirt or a long-sleeve western shirt, blue jeans, a brown leather belt with a metal plate buckle and brown boots.

A young Luke Duke is arrested for blowing up illegal fireworks and sentenced to a summer of hard work on the farm of his Uncle Jesse in Hazzard County. When he arrives there, he bumps into his cousin Bo who has been arrested for destructive driving, and the two immediately start fighting.

From then on, the two stick together and take all their actions in common until Bo runs the General Lee into a tree whil they chase Boss Hogg's nephew Hughie on his way to a secret distillery. Luke blames Bo for having blown their last chance to save Uncle Jesse from jail and to get his farm back from Boss Hogg. He walks away, leaving Bo behind. Just as Luke is about to cross the border of Hazzard County, a truck from Boss Hogg's ice cream factory arrives. Luke wants to hitch a ride, but he truck drives by. Luke angrily hits the truck with his hand and feels that it is warm. He concludes that the truck does not transport ice cream, but spirit. When Bo arrives in the General Lee, Luke quickly agrees to his suggestion to forget what happend. Together, they succeed in unveiling Boss Hogg's illegal distilling activities, thus saving Uncle Jesse from jail. With their reward, they can buy the Duke farm back from Boss Hogg. 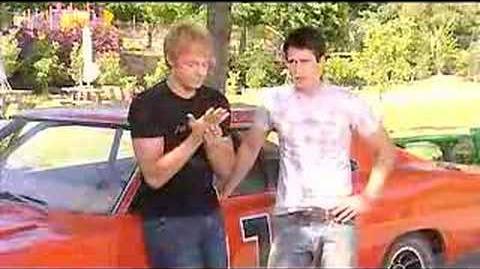 The Dukes of Hazzard The Beginning - Meetin' the Duke Boys