Lucas K. "Luke" Duke is a fictional character in the American television series The Dukes of Hazzard which ran from 1979 to 1985. Luke was played by Tom Wopat (b.1951).

Luke, and his younger cousin Bo Duke live in an unincorporated area of the fictional Hazzard County, in Georgia. When Luke was born, he was delivered by their Uncle Jesse[1]. He came to live on the farm as an infant. At some point early in his life Luke's parents had a second child named Jud, but he was thought to be lost in a fire at the hospital[2]. Luke remained on the farm after his parents died. Luke was said to have a temper as a child, being punished by their Uncle quite a bit and even getting angry enough at his younger cousin Bo that he broke a baseball bat by swinging it at Bo's head[3]. Luke was very athletic as a child, being part of a little league baseball team[4] and a basketball team along with Bo, Cooter, and Enos[5]. Luke said his childhood dream was to design and maintain a winning car for the NASCAR circuit[6].

Around the time Luke was old enough, he enlisted in the marines and deployed to Vietnam. Luke did some time as a boxer while in the marines but after an accident during a fight where he seriously hurt his opponent, Luke quit and refused to box again[7]. When Luke was a Lance Corprol he met Candy Dix, who he fell in love with enough to contemplate asking her to marry him. However he never did and they went their seperate ways[8]. At one point during a jump, Luke's chute didn't open and he was saved by one of his fellow marines Phil[9]. When Luke was a Sergeant, he discovered one of the marines, Benson, was stealing from a friend of his and killed the friend when they discovered what he did. Luke had him arrested[10]. He was discharged from the marines in 1976[11].

Luke and Bo own a 1969 Dodge Charger, nicknamed The General Lee, which is painted orange, with the Confederate Flag on top, and 01 painted on the sides. The two cousins built the engine and made the car togetehr in 1976[12]. Luke and Bo evade the corrupt politicians of Hazzard County, such as Boss Hogg and Sheriff Rosco P. Coltrane.

The Duke family, including cousin Daisy Duke and Uncle Jesse Duke, is well known for their role in the moonshine business among other interests. Bo and Luke had both been sentenced to probation for illegal transportation of moonshine. As a result, neither was permitted to use firearms, instead preferring to use bow and arrows. It should also be noted that the terms of Bo and Luke's probation included staying within the boundaries of Hazzard County (unless given special permission by their Probation Officer, who happened to be Boss Hogg).

Of the two Duke boys, Luke was generally considered to be the more "cool-headed" one. Luke was older, and more mature than his younger cousin Bo. He usually thought his way through situations that arose, in contrast to Bo, whose actions were much more precarious. However, when it came to fisticuffs, Luke was generally the more skilled fighter of the two. Where Bo was the one known to get the two into trouble, Luke was the one who usually got them out of it. Luke was the more physical one, often performing stunts like jumping onto moving cars during high speed chases and rescuing Bo from sticky situations. In one episode, Bo mentions that Luke had served in the U.S. Marine corps and because of the time period it can be presumed that he fought in the Vietnam War. His service in the Marines is confirmed in the episode titled "Mason Dixon Girls" where Luke explains he learnt to hand glide in the Marines.

Luke's famous "hood slide" (as seen in the opening credits) is the trick most commonly associated with the character. In a subsequent TV interview, Tom Wopat admitted that the move was actually a mistake; it originated when he was trying to vault over the car to get to the passenger side and his foot accidentally caught the edge of the hood, causing his leg to slide across it. They actually reshot it without the stumble, but for some unknown reason the show aired the slide with the stumble. The move eventually caught on and became the character's hallmark.

Despite being quite a skilled driver, Luke rarely ever drove The General Lee; he usually preferred to ride shotgun, while Bo chose the driver's seat.

Luke later left Hazzard County, along with his cousin Bo, to join the NASCAR circuit (they both returned the following year).

According to the 1997 Reunion movie, Luke eventually would leave Hazzard for good, and put his military training to good use by becoming a fire jumper for the U.S. Forest Service. During training in Montana, he met and fell in love with a woman named Anita Blackwell, who was a talented singer. He convinced her to leave to pursue her dreams, and she became a successful country music star. Luke met her again in the 2000 Hazzard in Hollywood movie, although by then she was married.

Luke in the Made-for-TV-Movies 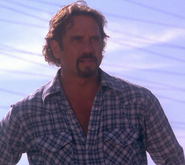 Luke in the TV Series 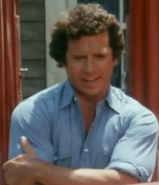 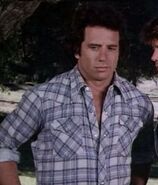 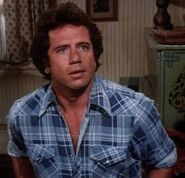 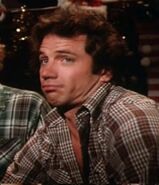