The Dukes of Hazzard: The Beginning

When mischievous teenaged cousins Bo Duke (Jonathan Bennett) and Luke Duke (Randy Wayne) are arrested (Bo for destructive driving in neighboring Chickasaw County, Luke for blowing up illegal fireworks), both boys are paroled to the care of their Uncle Jesse (Willie Nelson) in Hazzard County, sentenced to a summer of hard work.

Jesse is carrying on the family tradition of producing the best moonshine in the county. Bo and Luke quickly tire of farm work and take an interest in some of the local girls of Hazzard.

One day, in attempting to visit the Boar's Nest, they see Jesse meeting with Boss Hogg. Jesse is arranging for his regular bribe to the County Commissioner to look the other way from his illegal moonshine operation. In the course of this meeting, the Duke boys inadvertently allow Hogg's prize pig to escape. The pig climbs onto the roof and is injured in the attempt to get it down. Furious, Boss Hogg demands a sizable amount of money from Jesse, due in two weeks, or he will foreclose on the farm.

Jesse believes his only recourse is his moonshine operation, but he cannot deliver enough shine in two weeks. Bo and Luke volunteer, and set off to find a fast car to do the job.

The boys enlist the help of their cousin Daisy Duke (April Scott), who has just turned 18 but is somewhat of a wallflower who wonders why boys don't notice her. She takes them to the high-school shop class, where they meet perennial senior Cooter Davenport, who gives them a fast engine. They go to the junkyard to find a suitable car, but don't like what they see. On their way home, they find some girls sunbathing next to a local pond. Bo knocks Luke in to try to impress the girls, but upon learning from Cooter that most people who jump in end up either "crippled, on life support, or brain damaged," Bo jumps in to save him but Cooter ends up actually doing it. While underwater, Bo discovers an abandoned 1969 Dodge Charger and believes it would be the perfect car. They extract the car from the pond, add the engine and some new paint, and the General Lee is born.

The moonshine deliveries go well. However, just as it seems they will be able to pay off Hogg, the Boss announces Hazzard is now a dry county, and offers a $25,000 reward for anyone who uncovers an illegal moonshine operation. He will turn the Boar's Nest into an ice cream parlor.

Meanwhile, Daisy falls for a new Boar's Nest bartender, Hughie, and applies for a job at the bar. He says she's not the type of girl who should work there, so she undergoes a makeover, cutting the pants off her jeans, to impress him. When she shows up wearing almost no clothes, with her hair let down, Hughie hires her immediately, and agrees to take her on a date.

Jesse then holds a large party to raise funds for the farm, but Boss Hogg and Sheriff Rosco arrest Jesse for illegal moonshine sales, and seize Jesse's assets. Daisy, Bo and Luke visit him in jail, and he tells them that Boss is as corrupt as anyone, and the best way to get Jesse off is to find evidence of this. Bo and Luke soon discover Hogg's plan. He wants to convince all the county commissioners in Georgia to ban alcohol, thus paving the way for a thriving ice cream business. More importantly, with all the ridge-runners in jail, Hogg will then be free to make a fortune selling his own illegal shine, turning the Boar's Nest into a speakeasy.

His secret? He wants the Duke family still, which produces the best shine in the County. It turns out Hughie is his nephew, and during his date with Daisy convinced her to tell him about the family secrets. Daisy is devastated.

The Dukes kidnap Boss and ride off in the General Lee with the police in tow. They threaten to drive into Hogg Ravine unless he tells them his plan. He is too scared not to tell, and his confession is broadcast over the CB thanks to Daisy's manipulation of Enos at the station. The Dukes then jump the ravine anyway (their first jump), and catch Hughie delivering illegal moonshine into Hazzard. The Dukes then make Boss pay them the $25,000 reward, which they use to buy back the farm.

Fed up with Hogg, the citizens demand he reverse his moonshine policy and free all the ridgerunners. However, just as it seems the 112-year-old candidate who always runs for county commissioner will finally win, he dies, leaving Boss as the only candidate, and he is re-elected anyway. Hogg summarily pardons himself for his misdeeds.

Also, Daisy is a Brunette in the prequel, and a blonde in the 2005 version (However, that's not to say that she didn't dye her hair at some point).

In the 2005 version, Luke kissed a lot of girls, including sexual intercourse in the beginning of the film, where Bo basically kissed nobody. In "Beginning" Bo is more of a lady's man while Luke can't really get a girl.

The Beginning also creates a different backstory than was created for the Duke clan and has several other differences to the original television series.

The film was produced under Warner Bros.' Warner Premiere label with a budget of $5 million.

An edited version of the film was aired on the ABC Family cable television channel on March 4 2007, prior to its DVD release.

→ see also Category:Images from Dukes of Hazzard: The Beginning 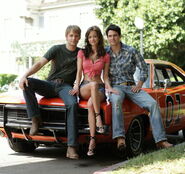 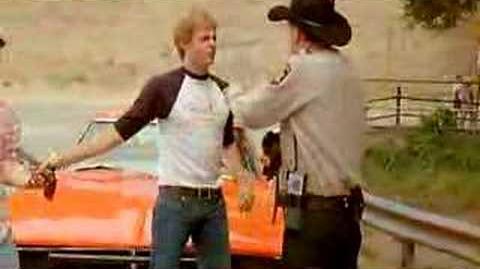 The Dukes of Hazzard The Beginning - Trailer 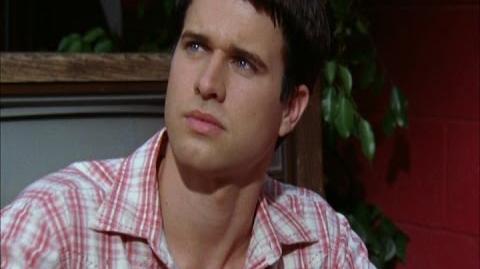 The Dukes of Hazzard - The Begining DVD Extras Part I 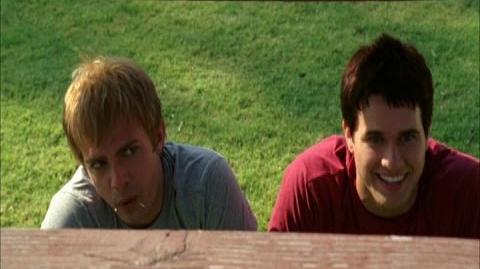 The Dukes of Hazzard - The Begining DVD Extras Part II