Tom Wopat is an American actor and singer. He first achieved fame as Luke Duke in the long-running 1979 television series The Dukes of Hazzard, along with John Schneider. He also played Jeff, one of Cybill Shepherd's ex-husbands in the TV series Cybill.

Wopat was born in Lodi, Wisconsin. He attended the University of Wisconsin–Madison, and made his television debut in the daytime drama One Life to Live; however, he achieved television fame in the popular long-running television series The Dukes of Hazzard (1979–1985).

He also embarked on a music career. He has recorded eight albums. Musically he switches between rock and roll and country music styles, though his last two albums have been of classic pop standards. The latter recording, Dissertation on the State of Bliss, is a collection of Harold Arlen songs.

Wopat first appeared on the Broadway stage as a replacement in the 1977 musical I Love My Wife, as "Wally". He then appeared as a replacement in the stage musicals City of Angels, and Guys and Dolls. He finally appeared in the opening cast of the 1999 revival of Annie Get Your Gun opposite Bernadette Peters, Susan Lucci and Reba McEntire, who played Annie Oakley (in consecutive order). He was nominated for a Tony Award in 1999 for his performance as "Frank Butler". He has since appeared in the revivals of the musicals Chicago and 42nd Street.

In 1996, Wopat served as host for Dick Clark's new country music performance show on The Nashville Network, Prime Time Country, however his time on the show was short-lived; before the first season was over, Wopat was replaced by Contemporary Christian artist Gary Chapman as host.

On November 3, 2005, a Smallville episode called "Exposed" reunited Tom Wopat and John Schneider. Wopat played Sen. Jack Jennings, an old friend of Jonathan Kent's who comes to Smallville to seek his help in an upcoming campaign.

Wopat starred in the North Carolina Theatre's production of The Music Man, in the role of Harold Hill in November 2006.[1]

In 2008, Wopat starred on Broadway as the father in the musical A Catered Affair, written by Harvey Fierstein (book) and John Bucchino (score), which opened on April 17, 2008 at the Walter Kerr Theatre.[2] He received his second Tony nomination for that performance.

Wopat starred as Detective Jones in the Independent Black Comedy, The Understudy

Wopat has returned to the Madison area for various occasions, including performances at various area theatres.

Wopat also provided a minor voice part as a member of the "Bloodhounds" on the 2007 release, Manhunt 2 video game.

On May 26, 2008, Wopat sang the "Star Spangled Banner" and "God Bless America" at the Milwaukee Brewers vs. Washington Nationals MLB game.

In 2009, he appeared opposite Kevin Bacon in Taking Chance, the HBO production about the returning home of a young man named Chance Phelps, a United States Marine, who was killed in Iraq. Wopat plays Phelps' father in the movie, which is based on a true story.

On April 21 and 22, 2009, Wopat appeared at the Baltimore Lyric Opera House in the musical "Chicago" as the greedy lawyer Billy Flynn. He has played this part in national touring productions.

Wopat, along with Nathan Lane, took part in a workshop of a new musical, Catch Me If You Can, in July 2007. It is based on the 2002 film directed by Steven Spielberg.[3] In July 2009, Wopat originated the role of Frank Abignale, Sr. in the musical "Catch Me if You Can" from July 2009 to August 2009 at the 5th Avenue Theatre, Seattle, Washington.[4]

Wopat is featured in the new musical revue Sondheim on Sondheim, conceived and directed by James Lapine, presenting the life and works of Stephen Sondheim. The revue premiered on Broadway at the Roundabout Theatre's Studio 54 on March 19, 2010 in previews and closed on June 27.[5] The show was a hit with Wopat a highlight - alongside Barbara Cook. 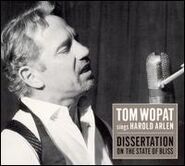